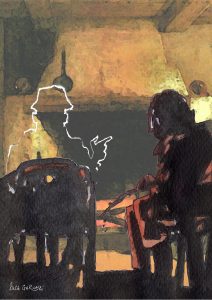 «Natalino, what are you doing? How many grapes have you eaten?».

«Who? Me? I haven’t eaten any». Natalino comes closer at his usual slow pace.
A little smile conceals the quick movements of his tongue that he sticks out to lick off the juice, mixed with the grape pulp clotted onto his lower lip.
He stops for a while, leaning on his stick. He looks at us from behind his dark glasses and, with his free arm, uses the sleeve of his old, wrinkled jacket to wipe his wet mouth carefully. From the porch, my grandfather and his friends observe that scene and laugh.