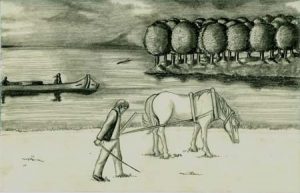 Mary had spent many days gathering wool from the whins on the headland. They were the bits of wool shed by the sheep before the shearing. When she had got a fleece that fitted the basket she took it down to the canal and washed it- When she had done washing it was a soft, white, silky fleece. She put it back in the brown sally basket, pressing it down with her long, delicate fingers. She had risen to go away, holding the basket against her waist, when her eyes followed the narrow neck of water that wound through the bog.