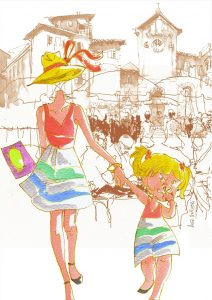 The alarm clock made Laura jump out of bed at seven thirty sharp. She marched to the bathroom, then to the kitchen, where she turned the TV on and enjoyed the pleasure of sipping the first coffee of the morning. From the screen Ornella the psychic told her she would have a day full of promising, but rather vague-sounding, opportunities. Encouraged by these prospects she came back to the bedroom where, once she’d cleaned up the mess and picked up Giacomo’s dirty socks and pants (he had woken up before her), she began the holiday unpacking. They had come back late last night: it was already dark and that morning the cases were still there, waiting to be unpacked by the bed, which reminded her of her housekeeper’s duties. She looked at the cases with a mixture of nostalgia and depression, but it was just for a moment: she couldn’t keep on dreaming, if she wanted to go to the market. She would have never given up her weekly stroll among the small stands, where she intended to show off her perfect caramel-coloured tan. Moreover, the market was the only noteworthy event in the small village immersed in the vineyards, where people meet in the churchyard on Sunday or among the stalls on Thursday.

She emptied the case, filled up the washing machine, woke up her daughter Sofia, who was still sleeping, gave her breakfast and finally she could take care of her own image reflected in the bathroom mirror. She looked with an overtone of criticism at her dishevelled hair, the hint of the bags under her eyes and the thin lips, her uneasy maternal inheritance, which had often made her contemplate the thought of having silicon injections. Armed with make-up and brushes, she got to work: the concealer made the circles under her eyes disappear and a skilful touch of blush created the illusion of high and pronounced cheekbones; she widened her eyes using the pencil and the mascara; and then took care of her mouth, which she made turgid by using a generous amount of red cherry lipstick. The face she contemplated in the mirror reassured her that the hours passed on YouTube, watching make-up lessons, had not been in vain. She brushed her unnaturally blond hair and she slipped into a microscopical dress that left her amber legs and shoulders in plain sight She fetched the coordinated bag from the closet and put her mobile in it: the stored images of her dream holidays (the resort’s slogan) had already been posted on Facebook. Therefore, she turned her attention to Sofia, who was sitting at the kitchen table still in her pyjamas, colouring the Winx’s curvaceous shapes. Laura interrupted her concentration: «Come on, honey, come to mummy! I have to make you look good because we need to go out».