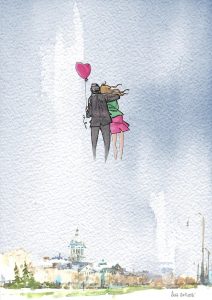 Last year, in the suffocating heat of the end of July, at the bar the only subject of conversation was the destiny of Martinelli Palace: the usual old men’s chats! While drinking a glass of white wine and a “pirlo”1 , we, historical inhabitants of this area, always like a bit of gossip and Augusto Martinelli’s story was too juicy not to make a novel out of it: at past sixty years old, he had decided to sell the ancestral palace and reach his love in Ukraina.
However, the destination was not convincing. Bepi, owner of the old bar that is now run by an enterprising Chang, kept on saying that Brazil would be better.
Anyway, the matter was much more interesting than the transfer season of Brescia football team. A war had broken out in the Martinelli family: the old bachelor’s mother and aunt did not want to have anything to do with the sale of the house because of a whore!
That evening my drinking partners recalled once more Beatrice’s story (you know, the old woman’s sister) guilty of chasing away Olga, a curvy Ukranian “badante”2 (however don’t you dare calling her badante: for them she was the housekeeper). For what reason? Augusto was caught in the act by aunt Beatrice, rummaging under the girl’s skirt.
It was almost dinner time and the aperitif ritual was celebrated. It was more or less the twenty-seventh of July. We were sitting outside the bar, with a glass in our hand, leaning unstable against one of those high tables that look like three-legged stools.
“A man should have the right to do as he likes!” declared, at a certain moment, the libertarian Sandrino who had once been a worker at OM, labour militant and a communist who never repented even if disappointed. He must have said to himself: “it’s now or never!”
At that moment, I dared speak as a well-informed person and as senior member of the group: am I or not Piero Franceschini, once the local pharmacist? “It’s impossible to do as one likes with those two women”, I peremptorily declared. “Beatrice was left a widower in 1965 and, since she had no children, she came from Naples to Brescia to stay with her older sister who was married to Amedeo. She locked herself in the house like a reclusive nun and I think she never came out anymore. She opened the door just a little bit when I delivered the prescriptions and never said thank you! She could not be bothered to come down to the chemist’s. However, heaven help me if I sent the shop assistant. I had to go personally. Between you and me, that one,
even when she was young, was off her head. Her sister Lucia has always supported her. These Neapolitan women are melodramatic, possessive and, most of all, they like to show off. But Augusto, Donna Lucia’s elder son, I have seen him grow up: he was always near his father, in the shop. A good boy, great worker, even though too submissive.

Winner of the “Muri di storie” [Walls of Stories] contest.

Notes
1Pirlo: a typical Italian aperitif, usually containing white wine, Campari (or Aperol) and seltzer. It is drunk before dinner with appetizers.
2Badante: italian term used to refer to a full time carer for elderly people.
3Lupus in fabula: Latin expression which means ‘wolf in the tale’ – the person we are talking about is appearing, be careful.
4From Dante’s Purgatory, ‘L’ora che volge al desio’ is the sunset.
5Another area of Brescia.
6Pastarelle: soft biscuits typical of Southern Italy.