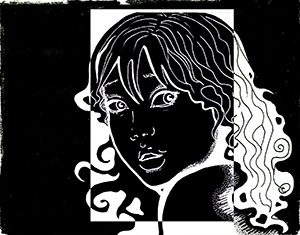 After taking a shower, Alice stood in front of her mirror, without looking at it. It was a large, vertical mirror, almost occupying the height of the wall. Her mother gave it to her.
She stood there for a long while, staring at her feet. They were nice, slender feet, with straight fingers. She liked that part of her body. She liked it a lot.