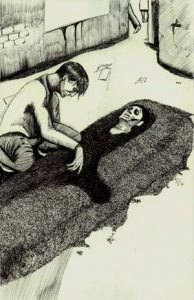 I came home in the evening, while long shadows were extending between the buildings, bridging at dusk. I crossed the main street and slipped into the narrow alleyway, unraveling among many crossroads, leading in front of my house. I liked to move among those lanes, deserted in summer, as if I went through a dead city.

After a few steps, while turning a corner, in a doorway a little further I noticed a shadow. It occurred to me that I used to meet a dark-skinned guy there, probably a Moroccan. He used to sit or stand, with his goods that nobody seemed to want to buy. I had been meeting him for years: it was as if he were always there, as if he had rooted.

As I approached him, I remarked something weird. The man gave the impression to sit, but instead of having the goods arranged on a cloth, he seemed to be wrapped with the blanket, lying to rest against the wall.

I stepped up, trying to see more clearly through the shadows that gathered in the hall, but I could hardly distinguish the shape under the blanket. I wasn’t able to take my eyes off that figure: as I tried to interpret his form, there was something wrong, a kind of dissonance in the vision.

A few more steps and I realized with horror that the man was not wrapped in a cloth, but covered with a carpet of earth. His whole body had disappeared under a blanket of brown earth, only his head emerging.

I walked up, and squatted before him. His eyes were closed, his face dirty with soil.

«What’s happened to you?» I asked, hoping he was still alive.

His eyes opened and silently looked at me. It seemed as if his eye had been torn: he was gazing at me empty-eyed, as from an infinite distance, lost in space and in time.

«What have they done to you?» I insisted. He clearly couldn’t have done it to himself. And also, where had all that soil come from? In the city there is only asphalt, and some remnants of soil badly covering the roots of haggard trees that provide shade to roads and sidewalks.

The man didn’t answer. I peered all around: suddenly I was afraid, I was alone in the street, and maybe those who had brought there that pile of earth were still nearby. But the city itself seemed void. Not even the traffic sounds reached me.

I put my hands in the earth, and began to dig. I wanted to pull the man out.

«Leave», ordered his voice. It was a strange hoarse sound, as if it came from the depths of his stomach.

I stopped digging. «Who did this to you?» I asked.

He stood glaring at me with that remote glance as if he didn’t understand the question. Then, flatly, he said, «They bury me».

«They bury me in foreign land».

«Now I free you, then we go to the police», I said, starting to dig.

«Now you leave», he interrupted. «You let me close my eyes and die».

«’Cause it is write» his indifferent voice explained. «They bury me ‘cauze I have to die. This is not promised land, this is sick land. But I realize late. They bring me good land to die in peace».

«Who are they?» I asked. Who could have committed such an atrocity?

«I now disappear» the man said, and closed his eyes. «Take not away my land. Not remove. Leave. Leave me peace».

I looked at my dirty muddy hands. My whole being fought against his request. I couldn’t leave him like that.

Then I heard footsteps getting closer. What if someone had thought that I did bury the stranger? If someone had believed that I wanted to kill him?

I stood up and ran hastily to the next turn of the road, without looking back. I ran home, climbed the stairs and locked myself in my apartment. I reached the bathroom and washed my hands to clear away all the earth left on my skin and under my nails. Then, I carefully cleaned the sink as well.

I laid down on the couch and remained distressed, gazing at the ceiling. What else could I do? What could I do? And who was the man who had asked me to be left there? But I didn’t understand, and I needed to understand.

I got up and went down again in the street. I went back the way I had done before in a hurry. I would go to the deserted alley as if I had never been before, I would again approach the Moroccan and ask him to explain the mystery.

When I turned the last corner I immediately wanted to look at the hall, but the road was cluttered by a waste collector with his cart, intent on emptying a trash bin. I stopped, uncertain, but the garbage-man didn’t notice my arrival. I looked in the lobby. The mound of earth was still there, but the head of the man seemed to have been swallowed up.

I walked. There was no trace of the man. I squatted again in front of the mound of earth. What if someone had come and pushed his head into the ground to suffocate him?

«What are you doing?» asked a voice behind me.

I got up suddenly, startled, and turned. In front of me there was the garbage collector, holding a broom and a shovel.

«I was looking at that strange mound of earth», I said with affected nonchalance. But I felt my voice shaking.

«Ah, yes», said the operator with disinterest. «I often find them. I don’t know who is the fool who goes around making mounds of dirt in the streets. People, you know».

«You often find them?» I echoed him.

«Yes. But now, if you don’t mind, I would like to finish my work. I can’t spend all my time talking with you». He stared impatiently at the mound of earth. I stared at it, too.

«Would you mind moving?» said the street sweeper, irritated.

I moved aside and stood watching at him approaching the cart, shoveling off the soil and throwing it in the bin on the cart. Of the Moroccan there was no trace, as if that pile had really swallowed him.

When he finished shoveling, the operator swept away the last layer with the broom, collected it on a metal dustpan and then began to clean up the sidewalk.

I approached the hall. Only my memory remained of that man. The memory of a stranger, an ordinary man of whom I knew nothing, not even the name or where he came from. A man who had come to find the promised land and had disappeared into thin air.

I walked back home again. The shadows were leaving the place to the evening, only on top of the highest buildings a reflection of the sun was still shining on smooth metal. A strange apprehension was following me. The mystery of a man I had met year after year, without even having the desire to know who he was.