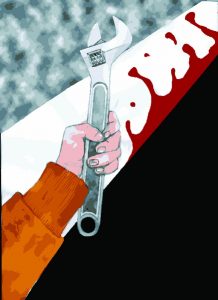 It was a night like many others in town. The new moon was late in lightening the alleys and paths among houses and fields and my steps were unsteady because of the excessive amount of alcohol that I had drunk that evening.
“Tomorrow is another day” I said to myself, mentioning one of those sentences that settle in the collective subconscious. Sentences that belong to everybody and nobody at the same time, just like sayings.
The day after would certainly be another day too similar to every other day to awaken my interest. Lift the lever, lower the lever, lift the lever, lower the lever. My days were reduced to nothing else than that. Up to the point of feeling like a machine myself. And Liana, oh Liana was so sweet, but too busy with her career to be able to put up with an exhausted man, who makes love like a machine: up with your arms, push with your feet, put the piston inside, down with your arms, release your feet, take the piston out, up with your arms.
Maybe this was the reason why she wanted to be a career woman. She did not want to be like me. And that evening she was out for her umpteenth business dinner with managers and some privileged colleagues. Who knows, she was maybe flirting with the ones working in high positions. Career was everything for her, the cure-all, the solution for all problems.
For me it was alcohol. After work, if Liana was out, a flying visit to the market to buy a special offer drink, a walk into the night among the houses and fields, looking for a localized peace.
That night it was late when I went back home with no memory at all of the route I had walked along. Like many other times. Liana would not arrive before one or two o’clock. Though, that time I caught sight of her: she was sitting in a sports car near a handsome sinister type who wore a two thousand euro suit and looked as he felt gorgeous; the hateful whisp of hair brushed his forehead. A manager, of course. They were saying good bye near our home. It was not really a regular good bye, like with shaking hands or a kiss on the cheek. Unless tightening lips and rolling tongues were a new conventional way of saying good night.
My car was parked three places behind them. I reached it, opened the boot, left there the empty bottle, drew out the monkey wrench. I remember this very clearly. Then, I reached the two bodies skein getting closer and closer, more and more locked. I gazed for a second at my wife’s bare breasts, her turgid nipples ready to receive the man’s tongue. Then, I acted.
The monkey wrench smashed the glass to pieces. The man raised and turned towards me at first looking afraid, then self-important and arrogant. I seized his whisp of hair and dragged his neck along the broken glass. While my wife, frightened, rushed out of the car and ran home, the manager bled to death gargling disgusting screams.
I grabbed my wife by her hair while she was trying in vain to unlock the front door. Her expression was of mere terror, her beautiful breast dashed out of her bra, lit by a street lamp. Then, only a second. Lift the monkey wrench, lower the monkey wrench, lift the monkey wrench, lower the monkey wrench. A simple daily movement.
Today is a day like any other. I don’t drink anymore and I walk for an hour a day in the concrete courtyard avoiding other people’s glances, words and gestures. The rest of the time, I remain in my cell. I read. I sleep. I don’t study, I’m not interested. Each single day is too similar to the other days to awaken my interest. “Tomorrow is another day” I say to myself. A sentence that should be full of hope. But for me it’s only routine. Life sentence, they said, despite the fact that I have no reason to kill someone else. But it’s quite a relief not to be in the factory anymore and life here is not worse, pugged of the same dullness.
Nevertheless, before going to sleep at night in the weak light of the moon that comes through the bars, it’s with bitterness that I repeat to myself: tomorrow is another day.

Miriam Bonetti
The Central was the historical bar in town, situated like a breach in the walls that surrounded the square along with an agonizing greengrocer’s...

Cataldo Russo – The Sky Above Me