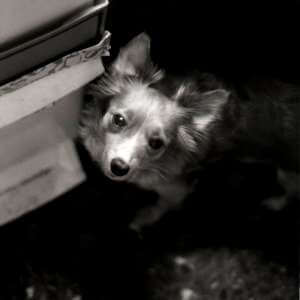 The old lady was the only one who grimaced. She looked like a farmer’s wife, someone who had grown up in one of the farmhouses of the Po valley, where winters seemed interminable. The other passengers, two girls, maybe eighteen of age, and a boy, tall, gaunt-looking , a free spirit, had not made ​​any objection. Indeed, they seemed happy.

«Look, this compartment is all occupied» she said as she saw the elderly couple with a load of suitcases and a small dog kept on a leash.

«I’m sorry, but we have reservations. Our seats are number 26 and 28 of this compartment» the man said quietly.

«… But are you quite sure that you can take the dog with you?» Asked the woman with a monkey like expression on her face.

«Well, I’ll check with the controller, you know, and if it’s not true, you can be sure you won’t stay here».

«My seat is on the window side, luckily» added the old woman, turning her head toward the other passengers, as if to say: «Say something won’t you, for heaven’s sake! I shouldn’t be the only one to complain».

«Good for you » replied the man. His wife was having a hard time controlling her temper; her changing expressions betrayed her emotions.

«Can I pet him?» asked the girl who was sitting on the other side of the window, as the old woman sank further into solitude. The train sped on under the July sun which reverberated on glass and rails.

«Sure» replied the owner handing the dog to the girl.

«Aren’t you beautiful!» said the other girl, patting the dog’s neck and head.

«She’s quite old, isn’t she? Almost eighty in human terms».

«Yes, but she’s healthy» replied the owner. The old woman continued to fume and then blurted out: «For goodness sake – where has the controller got to? I’m not staying here a moment longer!». She got only shrugs as a response from the other passengers.

«What’s her name?» asked the other girl with light hair and jean shorts.

«Thanks» replied the owner.

The more the young ones fussed over the dog, the more it bothered the elderly, fuming lady who looked sideways at them.

A quarter of an hour later the controller arrived.

«Tickets, please» he said in his heavily accented Lazio voice.

«Excuse me, do you know these passengers have a dog?» she said, pointing to the couple, who, in the meantime, had taken their seats near the door, with the dog curled up at their feet.

«Yes, but I see that they’ve paid for its ticket».

«I will not travel in the same compartment as a dog» added the old lady, getting nervous.

«Do you have any form of allergy or are you particularly afraid of dogs, ma’am?».

«Neither one nor the other. I simply cannot stand them. And it’s not hygienic, either. Please do something about it».

«I’ll see if I can find an accommodation for you in another compartment» he responded in a polite tone.

«No, no. I ‘m certainly not moving from here. They’ll have to change» she answered with a hard tone.

«If I find you another compartment, where the dog doesn’t bother passengers, would you mind moving?» . The woman was about to answer the controller that she had no intention of moving , when she felt her husband’s elbow pressing into her side, as if to signify: «Let be, we do not have many cards to play. Rules are not clear at all. You never know whether travelling with a dog on the train is a right or a courtesy».

«Well, if you can find another compartment for us, it’s quite alright by us» the man said to the controller. The Railway man came back after a few minutes saying he had not been able to find two seats, but that in the compartment next to theirs a young man was willing to make a change with the elderly lady who would not put up with the dog. It was not easy to convince the elderly woman to accept, despite the arguments of the young people who were more than willing to make the trip in the company of a friendly dog who greatly appreciated their attention. The nearly 900 km from Milan to Taranto were literally devoured by the Freccia Rossa train, which sped along, regardless of the slopes and inclinations of the tracks. However, the surprise that awaited the two elderly travellers, once they got off in Taranto, was huge.

“Ongoing Passengers from Milan to Crotone are requested to go to the bus depot next to the train station, to continue their journey”. The two looked at each other perplexed.

«I’m sorry, but isn’t there a train to Crotone?» the man asked a train technician.

«No, they’ve been cancelled. You have to take the bus. From Taranto to Metaponto there are only buses. It’s a nice trip though!». The man thanked him and went with his wife towards the bus.

«And what do you think you’re doing?» said the bus driver gruffly, as soon as he noticed the couple with their load of luggage and the dog on a leash.

«We have to continue our journey to Crotone».

«She is travelling with us. We paid for the ticket».

«Yes, if you want to check…» the woman said, showing him the precious document.

«But didn’t the agency that issued the ticket tell you that pets are not allowed on buses?».

«They certainly did not. I insist – we paid for the dog’s passage and no one has objected so far» the woman replied.

«Ticket or not, animals are not allowed on the buses».

«What shall we do then?» asked the woman.

«Noo! And where should we leave her?» she asked ironically.

«That’s none of my business, the dog cannot come».

«So what you ‘re saying is that there is no way we can continue our journey to Crotone with our dog?» said the owner.

«So, what should we do – go back to Milan?» ironically commented the man.

«Good, I see you’ve got the picture. Or you could leave the dog here and continue by bus. It’s very comfortable, you know. There’s air conditioning, television, radio and…».

«Here, here on the esplanade?» interrupted the owner once more ironically.

«Yes, here, it won’t take long for it to join the dozens of stray dogs that thrive here like mushrooms. Puglia is the region with the highest percentage of stray dogs».

«I see that in addition to your job as driver you’re also a bit of a statistician».

«Look, this dog is small, docile, she won’t cause any trouble. Let us get on, please» asked the owner pleadingly, seeing there was no other way out . The driver thought for a while and motioned to the man to approach. The eyes of the couple lit for a while thinking about an ‘Italian compromise’.

«D’you want some advice?». The owner mentioned he was all ears. «Over there on that corner there is a café – go for a coffee. Outside there is a man – give the dog to him and go inside, relax and drink your coffee. A small tip, one or two Euros, and when you leave the problem will be nicely solved».

«What do you mean?» asked the owner of the dog, pretending not to understand.

«That is to say: the man will take care of the dog and you can get on the bus and go ahead with your journey». The owner was shocked. He could not believe his ears. When he recovered from that shock he said: «Keep your advice to yourself, we don’t need it . And now, if you do not mind, let us in».

«You still don’t understand, do you?» replied the driver, with a grin on his lips. «The dog is not coming, and I won’t even accept all the luggage you have, if you insist on not wanting to understand».

The owners realized that it was useless to continue the discussion with a man who considered animals as good for slaughter, so they went back to the station. When they asked the Trenitalia manager for an explanation and submitted a formal protest for the inconvenience that had been caused to them, they got only vague apologies and a shrug, since he persisted in misunderstanding, and nothing else. The owners’ reasoning seemed to slip away like water on a waxed floor. In the end the poor dog owners had no choice but to resort to a taxi driver, what’s worse, an unauthorised one, since a half-dozen of his colleagues provided with a regular license, had refused to accept the animal on their vehicles. The cost of the ride, Taranto- Metaponto, from where they could take a train to Crotone, accumulating biblical delays, was a real cold shower, but at least the dog had saved her life.