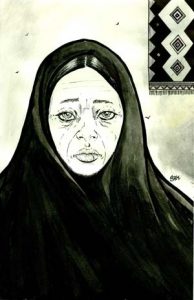 He could see himself as a child sitting on a rock beside the fire while his mother, her veil lifted and her nails black from soil, kneaded bread telling him the story of the kilim. «I was your age, my Süleyman, when I started. I worked at Aga[1] Ahmed Bey’s factory, my tiny hands were fairy jewels. I wove beautiful carpets, silk tapestries that told the story of Kawa and Zuhak the tyrant, but no cloth is nicer than my kilim. I gathered from the earth all the broken threads and every night I‘d weave them again, giving life to the cloth. Each thread a dream. A dream of your mother Zare, my blessed son. Each thread a dream. I finished it the night before I got married. It was my gift to your poor father. It will be yours, my Süleyman, the day Zare will be judged by Allah the Great. Yours will be the dreams and memories of Zare. For eternity».

She always concluded like that, his mother did, staring at him straight in the eye and caressing lightly his hair matted with dirt and lice. It was like a song of longing and hope. It was like the colors of a summer day, from dawn to dusk.

«What are you doing there dazed, Lofty? Wake up! Can’t you see that now it’s evening?». Hayri shook Süleyman, who was sitting on the steps of the Great Mosque in Istanbul. Orange flashes dyed the sick white sky and the muezzin called the faithful to the last prayer. The scents of the köfte[2] seller mingled in the air already smelling of greasy petrol and hunger of the two skinny boys.

Süleyman, his eyes still lost in the memory, looked at Hayri without rising: it had already been a month since they had left the village and their shabby clothes had turned loose, dressing them like big empty bags.

« Lofty, what’s with you? Are you sick?». Worried, Hayri, questioned Süleyman’s empty look.

«I was thinking about my mother».

Hayri dropped on the steps beside his friend. Next to them, three cages packed with small colorful birds chirping desperately and relentlessly. Hayri stared at them for a long time, then took out of his pocket the earnings of the day: 325 liras. In those weeks they had not been able to sell even a tenth of the birds that they had captured and the time of Ramadan was over. People did no longer «Azat Buzat»[3], did not want to release a bird to be saved in the presence of Allah. Heaven no longer interested anyone.

«I do not know, Hayri. I do not know». The anguished voice of Süleyman groaned like an old cart. Hayri could not bear it, «We may embark with the Bosphorus fishermen. We’ll clean up the fish, wash the deck, and clothes, and nets. Cook for everyone. Eat leftovers and the money we earn will go to get back the kilim. We’ll make it, you’ll see. We’ll make it». He had jumped up, shouting excitedly about that imaginary salvation.

Süleyman stood and lowered his face, humiliated, «It will not be enough. Mohamed, the merchant, will sell the kilim next month. This was the deal».

«We’ll talk to him, Lofty. We’ll say that people have become unfaithful. That they wouldn’t buy the birds. That we are honest. That we’ll give him back his money, and a thousand liras more, as long as he doesn’t sell the kilim. He’ll understand. You’ll see. He’s a village man like us. He will understand, you’ll see».

Süleyman looked at him with a cynical smile.

«What are you laughing at, you damn Giaour! There is nothing to laugh about! We’ll make it, I tell you. We will work on ships. And the merchant Mohamed will understand. He’s a real man, that one. A real man».

«Shut up, damn you. Shut up». Süleyman suddenly jumped up, shouting and shaking his friend with ferocity. «It’s not enough, do you understand? Not enough! I’ve already talked to him yesterday. Mohamed the merchant will sell the kilim next month. Nothing will do, you stupid beast». And he pushed him away, causing him to fall.

Hayri remained on the ground, motionless. «Aunt Zare will die because of this». He spoke those words in a whisper, as if they were a curse that could not be avoided.

He was seeing his mother’s eyes every night. He saw them every day, on waking. Those eyes. Eyes from that night. He had stolen the kilim and along with Hayri pawned it with Mohamed the merchant. For thirty thousand liras. To buy the nets and cages to catch birds. To sell the Azat Buzat, the keys of heaven.

«How could you?». His mother’s eyes were there, dry and without a veil, in front of the door.

«Mother, my beautiful one, don’t get mad. It ‘s just a loan, the kilim is safe. Look: the nets. The cages. I will make a lot of money in Istanbul, I will rescue the kilim. We will have money for the whole year, you’ll see. We shall become rich and pay all the debts. I will catch the most beautiful birds and everyone will run to your son to buy them». Süleyman was explaining, excitedly waving his arms and hands.

«Zare, my beautiful mother, do not be stubborn. I didn’t do anything. Look, look yourself how beautiful these nets and cages are. Look at my hands, the hands of your child. They are big and strong and nimble. The birds will fly to me». Süleyman begged, but his mother wouldn’t even listen. She just stared at him. Without anger, without hatred. Lost. Süleyman repeated and repeated the same words, making them nicer, tried to reassure her, confident that sooner or later she would understand.

But her eyes remained there, fixed and dry. Lost.

It was morning when she stopped looking at him and dropped the black veil. Süleyman could swear that his mother’s black eyes had changed color. He had seen it. But he could not name it. He had never seen a color like that.

«I’m hungry». Hayri’s weak voice broke the silence of the night. The stairway was empty now, and the köfte seller was putting out the last embers. The birds in the cages were exhausted and chirped faintly.

Süleyman stood up from the steps of the Great Mosque.

«Go and buy bread, Hayri. We are going to eat meat tonight».

Hayri looked dazed at his friend.

Süleyman shouted: «Wake up, you son of a bitch! Buy the damn bread!».

Hayri ran away, through the quiet streets of the city.