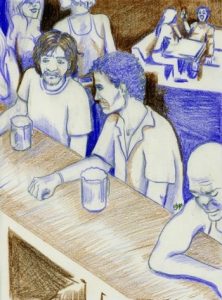 «When?»
«Tomorrow».
Martín’s voice arrived soft, as if his answer had smashed into the dirty window he was staring at.
Arsenio one moment looked at him and another mirrored his thoughts in the jug of his dark beer on the table; Don Toñio’s Inn was crowded with the usual customers, but the hum of those distracted chats couldn’t penetrate their silence.
«Would you like another beer?» he asked him, looking at his friend’s empty glass.
Martín remained silent, without even turning to him.

Arsenio stood up, walked away and then came back with a jug full and foamy. He put it gently near Martín’s hand and sat again, in respectful silence, in front of his friend’s absorbed stilness. That was the sole consolation he was able to sustain, the sole he could feel true.
Arsenio went back mirroring in his glass and the memory of that day. He was still smelling the stink of fear: between the dark shades of malt he saw again the man in Martin’s house, his dark glasses protruding under the Balaclava, his elegant suits, and his calm lethal attitude. He saw again the barrels of his minions’ pistols and machine guns pointing at Ana’s terror.
«Very well», the man said, «let’s get this over with. I know exactly who you are, lieutenant Martín».
«And who are you?», replied Martín.
«I represent the professional gangs of this area and I’ve come to ask you, or I should say beg you, to stop pestering us; turn your face to the other side and leave us working in peace. Think of your babe – pointing to Ana – and the baby she is carrying –pointing out her belly. Go ahead, feel free to arrest the pickpockets and the little fishes, but leave us in peace. This is the first and only time we’ll talk peacefully. We are important people, mate. If you prefer, and you better think about it, just tell me how much you want. I will contact you only once again. And pray not to see me this way».
Then his henchmen and him left. Ana was sobbing, and Martín only had his arms to protect her. But they wouldn’t be enough to stop the bullets.

«Arsenio, why don’t you write of sunsets and love passions instead of people being murdered?». Martín’s voice distracted him from the stench of his memories. He looked up on his friend and realized that he still had an eye to the window, but now he wasn’t absent anymore. Only few customers were still at the Inn and their chat had become a quiet, distant whisper.
Arsenio turned to look at the window: the clear sky was getting dark and the skyline of Bogota hills was painted with big burning cloves. In a while, the sky would show a majestic fire. In days like this, if you just look at the hills, you could even think of Bogota as a strip of Paradise.
Martín stared at him: «If I were a writer like you, I would only write about these things», he repeated, glancing beyond the window. Arsenio merely returned his gaze. Martín scrubbed his forehead: «I don’t know whether I did the right thing, Arsenio. Tomorrow we’ll capture those assholes and people will know that it was Perientas, the deputy Head of Police, who commissioned the thefts in the centre, so he could finance AUC . But Fernadenz, Calì’s boss, will be free. I wasted five years of investigation and lost 30 men before he was captured».
Arsenio was silently listening to his pain.
«If you had to drink an unpleasant medicine, does it matter if you can choose between two equally bitter ones?»

Arsenio didn’t know what to say, but he tried to readjust the balance of Martín’s soul: «At least, there is one less corrupted man in the police».
Martín sadly shook his head: «I’m not so stupid, Arsenio. I have been able to do it just because Fernandez is financing somebody who is much more important. In the end, he is the big fish and, thanks to me, Perientas has now become a small fish. Everybody knows that once a fish is without water, it loses weight in a few hours». He looked outside the window again. The darkness of the evening was making its way through the last sunset faults. «All in all, I simply did it to save my ass. And you know very well», Martín concluded, drinking his stale beer in one go, that was now warm as piss.
Arsenio went back to look at the night. The shadows of the rising darkness stood out in the greasy stains of the window. Rising his eyes, he could notice the first stars lighting up the night.
«Martín, you know, you can’t describe each day simply looking through a crack. That’s why I can’t write only about sunsets and passions».
«Of course». Martín’s voice had the disenchanted flavor of dried blackberries.
Two days later, Arsenio went out early in the morning. The light was covered by small, marble clouds. On the road, in front of his house, a boy was shouting loud, handling out El Tiempo: «Buy the newspaper! Buy the newspaper! Fernandez escaped from prison! Perientas arrested! Buy the newspaper!».
Arsenio handled two coins to the child and took the newspaper. The first page was split in two: on the right the news about Perientas, on the left that about Fernandez. Two columns each. In the middle, on the background, a small square advertisement about the new literacy program for street children. Captured by it, Arsenio took his time to look at it. It was like viewing a painting.