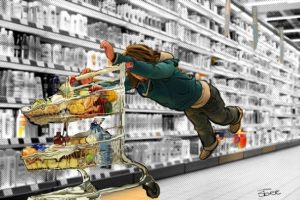 The man slowly walks along the endless corridor, preceded by a huge empty shopping cart that seems to drag him along rather than being pushed him. He sadly glances at the polished floor, almost as if to calm the increasingly obsessive feeling of being watched.
The long hallway is completely deserted and so are the countless passages that depart from the main corridor every couple of feet which seem to get lost in the infinite. A noise behind him makes the man stop. He suddenly turns. Nothing. He starts to walk slowly again, as if it was a Way of the Cross, more and more aware of not being alone. He (or the cart?) takes one of the many ways, which have long rows of shelves at the sides. The shelves seem to burst with all sorts of objects. The man watches in anguish the merchandise staring at him. Anguish turns into terror when he finds out, as if he was under the influence of psilocybin, that the packed shelves move to the rythm of his breath. When he breathes out the bookcases on the sides bend, stick out above his head almost touching each other, forming an oppressive tunnel above him. Breathing in, everything goes back to how it was.
The man holds his breath for a couple of seconds, stopping the nightmare. He gets flushed, violently exhales all the air in his lungs and everything seems to collapse all around him, only to miraculously recompose itself with a new, relentless and liberating breath of air.
As if he was a convict doing time he drags himself in the maze like a fearful Theseus. A fake porcelain doll glances at him, mechanically tilts her head and gets stuck in that position, with a broken neck, staring at the wide-eyed man, who picks up the pace terrified, in an unlikely and useless escape. He can hear a torrent of laughters coming from behind. He suddenly turns around with bated breath.
There is absolute immobility. A kind of madness takes hold of him. He starts running pushing (or being dragged by) that infernal thing. At his passage, objects of all kinds plunge into the shopping cart, filling it almost to the point of making it burst. His step becomes ponderous as the ballast gets heavier. The man sweats. He sweats and cries. His shirt sticks to his flesh and his eyes stares at the nightmare that haunts him through a filter of salt water that burns his eyes.
Then there is a sudden explosion of lights, colors and scents. Thousands of bottles lined up on a loading bed, like soldiers of a crazy army, noisily pop in champagne spurts, pouring rivers of liquid on the floor. The corridor is now a Red Sea to cross. A Red Sea that does not acknowledge the authority of its Moses, and does everything except retreating to let the man through: he loses his balance, falls and soaks, tries to get up and clumsily falls over again and drinks almost to the point of drowning.
The bottles explode in a crash of splinters and pieces of glass fly on the man’s head like deadly mad bullets that fall to the ground at the height of their trajectory, like crystal snow. The man gasps. Suddenly, he thinks he is having a vision: he can see a person rapidly progressing in front of him who is also pushing a half-empty trolley. He looks at that person with relief. He is not alone, then. Maybe he is safe! Then he sees another person and another. What until a moment ago was a desert becomes now a crowded place. He looks around. People, there are so many people. A lot of people. A shitload of people.
Too many people.
The swarming that he feels around terrifies him. Everyone feverishly stocks up on things from the shelves, throwing everything into those horrible monsters with enormous mouths that swell to hold as much stuff as possible, as if they were alive.
People look crazy and drunk, gripped by excitement.
Workers of the world, united in the orgasm of goods!
The man begins to run bumping into bodies right left and centre, tries to wriggle out of his shopping cart, but he does not manage to do so, it is almost as this was now an inseparable part of his body. He simply cannot do it. It is like trying to get rid of an arm, or a leg. While he is running, he keeps emptying his shopping cart, but for each object that he throws away, three plunge into it, perfectly centering that horrific container.
The man feels exhausted, dejectedly stops, is defeated in that unequal fight; he turns and glances at a wall of the long corridor. There is a mirrored column. The mirror reflects the image of a burly, heavy body and as he slowly, very slowlymoves out of the shadow, his face shows first the nose, then the bottomless eyes and a sad mouth. Eventually his distinguishing feature appears: it’s the soul patch under the lower lip. As he recognizes himself, he is completely shocked. There is no doubt, it’s just him: the buyer.

Lara Gregori – A Thread, A Dream