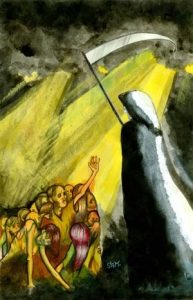 The place is far from the village just enough to prevent children from going there alone to play.

Adults prefer not to pass by: to get to the other side of the valley they use the bridge crossing the river south, near the sawmill. The place itself is not bad: a meadow, surrounded by tall cypress trees, in a natural basin at the foot of a short descent. It is called “the Lazaretto” because during the great epidemic that struck the area in a remote past, the plague victims were confined and buried there.

Almost in the center of the lawn a small chapel, now decaying, rises next to the remains of a low bell-tower, on top of which a solitary bell stands in precarious balance. Inside the chapel, on the wall less exposed to weathering, a rustic painting, miniatured by the fairly naive hand of an unknown artist, emerges on the surface. In the foreground, a figure depicted from behind, hooded and covered by a gloomy black tunic, holds a sickle; at his feet, an indistinct group of emaciated people, with clothes torn to shreds, is kneeling in a suppliant attitude. In the background, grey clouds obscure a pale sun. Under the drawing of a sundial aside the painting a warning says: Always remember this day, the time spent doesn’t come back.
The people of the village avoid this place, perhaps out of respect, perhaps because of a fear due to rumors among the villagers. They allude to scary presences that sometimes show near the chapel.
The first to mention it was Bartolo, the shepherd who lives in a hut perched on the mountain, which overlooks the entire valley. Bartolo reaches the village from time to time, to sell his cheese and get what he needs to live up there. On these occasions, he spends most of his time at the inn, where he often happens to drink too much. Thus, his version has not been taken seriously by the others, devoted to organize a honorable funeral for the elderly and respected pharmacist of the village.
For a while, everything goes quietly. Then Gina, the butcher’s daughter, happens to die so unexpectedly as suddenly. And once again Bartolo, who arrives at the village, claims to have noticed mysterious figures wandering in the shadows of the chapel. Obviously, people don’t believe him. Until Tonio the carpenter, returning from work at the sawmill, walks thoughtfully along the path beside the Lazaretto: back to the village, panting and breathless, he tells the same story.
That night, the widow Borlin passes away.

It’s almost evening. At the Lazaretto everything seems quiet. But if you turn your gaze to the corner of the chapel, where the leafy cypress trees cast their shadows, you can see three figures. They are three women dressed in black, old, skinny, almost dried up, kneeling on the ground, their faces hidden by large dark shawls. They are playing dice, slowly. They throw in turn, check the score and start again, waiting for the deadly sequence to form: six, six, five.
Suddenly, a crow gets up in flight, cawing. The game stops. A grey cloud hides the pale evening sun. A gust of wind stirs the branches of the cypress trees.
The three old women raise their heads, look at each other, nod in unison, then lower their heads again, while slow and mournful strokes repeat the newly formed, unfortunate sequence: six, then six, and finally five.
This confirms that another soul is gone.

Night falls, lights turn on in the houses, women are busy around the tables, doors are closed leaving out the impending night while families gather to eat dinner.
In another house, in that house, the flickering light of the candles accompanies the painful groan of the people, gathered in prayer.
A pale crescent moon lightens the Lazaretto, ghostly illuminating the corner of the chapel where the three old women were sitting: they have gone to some other place. A new village where they start their fateful game over and over again.

Lara Gregori – A Thread, A Dream

Lara Gregori – The Pardon, the Grace