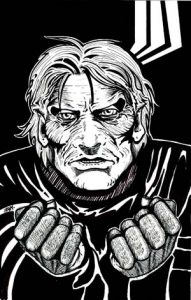 Five stitches on the right wrist, six on the left, Sam White had been marching non-stop for hours from wall to wall of his cell. Damn surgeon! How could he? The cuts he had inflicted on himself were perfect: four centimeters on each wrist, one centimeter deep. The accuracy of his calculation was absolute; that idiot at the ER had added one more stitch. Or one less. How could he? To him! To Sam, the surgeon! He, who had skinned all his victims like works of art, without even a smudge! He, who had smoothed their skin, restored their blemishes, taken care of every small detail to make it a single big picture, a single shape, defined and unchanging. Preserved in formalin. No damage any longer. No degeneration.

“Nasty mutilation”, the newspapers had said. Stupid bastards! Now his wrists were so horrendous. Scarred beyond repair.
«Eat, Zorro, the food’s gettin’ cold!». John, the guard on duty, was watching him through the hole on the door.
Sam turned and kicked over the table and the tray with it. The chilli of the tacos was shattered on the wall. «Fuck you», and began to march again.
«How is Number 22548?».
«Quite restless. He’s been walking all day long in his cell, cursing. He’s just knocked over the dinner with a kick».
«Um… I see. What did the chaplain say?».
«Number 22548 did not want to see him, sir».
The Prison Director stopped combing through the documents on his desk. He looked at John, standing in front of him, but he didn’t meet his eyes.
«What about the encounter with his wife?».
«He didn’t even want to see her, Sir».
The Director scowled: «Did he explain why?».
«No, sir. He only said that he wouldn’t allow anyone to see him like that».
«What did he mean?».
«I don’t know, sir. If I may…». The guard stopped talking. He knew that the Director did not like opinions in reports. He was interested only in the facts. He preferred just to look at him, waiting for a nod of acknowledgment.
«What?».
«Sir, Number 22548 is furious since when, three days ago, we saved him from a suicide attempt. It all started upon his admission to hospital. He tore bandages apart and started screaming, hurling at the ER doctor. Thanks God he was weak from the blood loss. We intervened just in time, he was already holding a scalpel to kill him. I think he is scared about tonight. He expected the pardon. He is obsessively repeating the word in his insults». John delivered his speech in one breath, eyes to the floor.
«The pardon?». The Director’s laughter exploded. He jumped up with his fists pointed on the desk. «That guy is a madman. A filthy mongrel and a madman. How can he hope for pardon after what he did? They should skin him alive. That’s what he deserves».
He immediately regretted his outburst. He stared at the guard, trying to steal from his face the risk he had run with this mistake. But John had already stopped watching, and stood still in front of him.
In the split of a second the Director realized that it had been John himself, who had found Number 22548’s lifeless body. He had rescued him in extremis. He was good at carrying out tasks. A man to be trusted.
He resumed his usual manner. He sat down again, pulling the letterhead out of the drawer: «Anyway, I do not want Number 22548 showing up this evening in this condition. The victims’ relatives have already suffered too much and I want no foolish behaviour. Let’s fix it as soon as possible».
He began to write. Then he folded the paper in an envelope and handed it to the guard. «Bring Doctor Davis this service order. A sedative has to be given to the inmate. Immediately. We have two hours left. Go».
«Yes, sir». John gave the Director a salute and ran off, heading for the infirmary.
In Number 22548’s cell Doctor Davis had rearranged the table and put his medical bag on it. Four guards with truncheons on their waists were deployed along the entrance wall.
Sam continued his march, ignoring them.
«Stop. I have to give you an injection».
Sam White turned: «What injection?».
«A sedative. It will help you not to realize…».
Sam looked at him sarcastically: «Thank you, doctor, for this kindness of yours. But I do not need any sedative. I am calm. I’m not scared of the electric chair. The only horror for me was to pollute myself with all those deforming burns, but now…». Blind with hate he stared at his wrists. He began his march again.
«Director’s order, Number 22548. I’m sorry».
Doctor Davis produced the syringe. «Stop it. Do not make me bring in the guards». He walked over to the prisoner, cautiously.
Sam started screaming and kicking the wall: «You won’t give me any injection, you bastards!». Then he turned, raising his arms toward the face of the doctor: «Everyone should see this mess! Everyone! This time no one will prevent it. My incisions were perfect. You cannot keep me from shouting it tonight. It takes Grace to preserve beauty! You, all of you who believe themselves the worthy, the righteous ones, you do not even know what Grace is!».
The guards rushed on Number 22548, bending him on the bed. Doctor Davis applied the tourniquet. He stuck the needle into the vein.
As the last drops of the drug were dissolving in his blood, Sam mumbled, «You do not understand anything. You never understood anything. It’s Grace that makes the difference. It takes Grace».