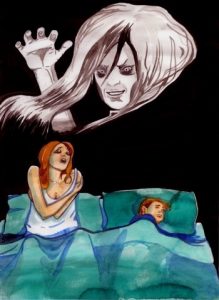 She falls quietly in silence. That’s how she does it in any case. Slowly slipping from twilight to evening, and without a breath she becomes night. In complete solitude. Will the night be sad? I think she is, despite the colourful lights of the neon signs and men’s pathetic attempts to turn her on. She remains on the sidelines watching, observing, smiling, feeling sorry for them. I understand the night. Because she’s like me. Not just because I am always dressed in black and my hair, my nails, my lips and the bags under my eyes are the colour of darkness; it is because I really understand her. She lives inside of me. I am the night. And she is me. It was from the moment I lost everything that I understood. Nothing else could penetrate my pain and stick to it so well.